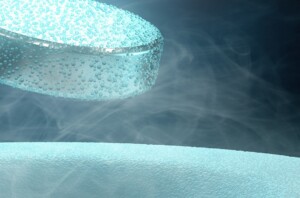 UConn physicist Ilya Sochnikov and his students recently made an important discovery regarding the superconductive abilities of strontium titanate, a common material in electronics. When in an ideal state, the compound’s atoms oscillate in synchronicity, which forces the surrounding electrons to move in a neat and orderly fashion, skyrocketing efficiency in the process. While strontium titanate is a strong candidate already, its natural state demands temperatures as low as 0.5 degrees Kelvin in order for true superconductive performance. The main problem with this extreme temperature is that there is no cheap or accessible way to reach these temperatures, especially in future mass market iterations. The team needed to find a way to increase the temperature threshold to reach a more viable superconductive solution. Instead of attempting to manipulate the material chemically (or find a new chemical compound all together), they used specially coated machines to stretch the substance in order to study the effects that such strain and stimulation would have on its atoms and their ability to oscillate in a manner satisfactory for superconductivity.

The compound was stretched using precise machines made from copper to conduct heat away and coated in gold to reflect outside heat. The compound then underwent a series of thermal tests which cooled the material to 70K, 4K, and slightly less than 4K to simulate the temperatures of common coolant solutions such as liquid nitrogen and liquid helium, which are cheaper and more accessible solutions than typically used to cool strontium titanate. In this article, they report crucial findings: “When Sochnikov, Herrera, Cerbin, Davino, and Franklin did the experiment and looked at the results, they found that stretched strontium titanate becomes superconducting at temperatures 40% higher than normal.” With such a drastic increase in temperature threshold resulting from a relatively small change, there is much hope and optimism tied to the experiment and the work of Sochnikov’s team.

When attempting to test something like a superconductive material, it’s crucial that you have access to advanced thermal testing. Khoury Industries offers top performance from thermal test chambers like the ELI-1000 and the Khoury Box for reliable and accurate thermal cycling. From superconductors to minor commercial semiconductors and sensors, we provide thermal testing solutions across industries.